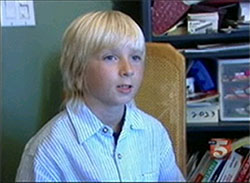 When 9-year-old Barrett Ross was born, his parents chose to save the blood from his umbilical cord – ignoring the genetic counselor who told them there was no need for the expense. There was nothing in the family’s background to indicate potential disease for the newborn, the counselor told the new parents. But Christine Ross, the boy’s mother, was thinking ahead. She thought by 2038, when her baby was 40, medical science surely would have use for the precious blood and its valuable stem cells if he were to develop cancer or another disease. “I never expected he’d use it as a child,” she said from Barrett’s fourth-floor room at Shands Hospital at University of Florida in the Clinical Research Center. Barrett was being prepped for an infusion of stem cells taken from his umbilical cord blood to see if the stem cells can slow – or even stop – the progress of his diabetes. Barrett is one of 12 diabetic children who are taking part in a national pilot study at the University of Florida in which physicians are looking to see if a patient’s umbilical cord blood provides a potential source of cells that can help treat diabetes. Funded by the Juvenile Diabetes Research Foundation and National Institutes of Health, UF doctors hope the stem cells can neutralize the autoimmune process and help regenerate some pancreatic islet cells. Dr. Michael Haller, a graduate from the University of Florida College of Medicine, is a pediatric endocrinologist at Shands. He said participants include children recently diagnosed with type 1 diabetes whose families banked their umbilical cord blood at birth. Most are still producing a small amount of insulin. “This is the first attempt at using cord blood as a potential therapy for type 1 diabetes,” Haller said. “We hope these cells can either lessen the immune system’s attack on the pancreas or possibly introduce stem cells that can differentiate into insulin-producing cells.” The patients are evaluated for two years to measure how much insulin they make on their own and to assess blood sugar levels and the function of key immune system cells. According to preliminary results, the young patients have required significantly less insulin and maintained better control of blood sugar levels than children of comparable age with type 1 diabetes. Haller stressed that the study is in its preliminary phase and could show that the valuable cord cells provide a supportive role in healing rather than actually repair damaged areas. “Right now we are not manipulating the cells. We are simply infusing the cord blood,” he said. “We know that no one thing is going to reverse diabetes,” Haller said. “It will be like AIDS or cancer; patients did not start getting better until a combination of drugs were administered. The same will most likely be true with diabetes.” 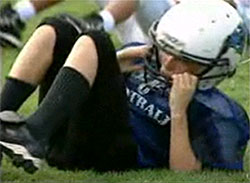 Barrett and his family hope so. According to Haller, Barrett is an ideal candidate for the experimental treatment because he’s a little older than most newly diagnosed kids, and his body still produces some insulin. After the infusion, which was a less-than-dramatic event taking only a few minutes in the transplant ward at Shands, Haller will keep tabs on Barrett’s production of insulin and his blood sugar levels for the next 24 months. The doctor can say for sure the experimental treatment won’t make Barrett’s diabetes worse. “Since we happened to store his cord blood and we lived in Florida, it seems like destiny that we were to be a part of this study,” said Barrett’s mother, Christine. “If we can lessen the severity of his diabetes or extend the time that he’s doing well, why wouldn’t we do it?”